Can Life Be Preserved?

0 shares
It was a bright Tuesday morning. The sun rays descended as though it was mid-day while it was just a few minutes after 8 am. The ‘busyness’ and business of the day had begun.  I was on my way back from dropping our daughter at school when I first heard the gun shots. Initially, I discarded them, thinking they were sounds of fireworks which was usually the case this time of the in the corner of the world where I live. But as the sound intensified and became frequent and distinct, it became clear to all in the vicinity that these were gunshots from a robbery operation nearby! 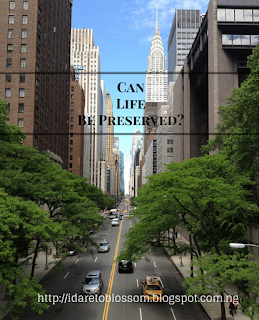 With this realisation, came fear and panic. Some abandoned their cars and run into the enclosed neighbourhoods, others jumped out of the buses they boarded in cases were drivers were adamant to take cover. That day, everyone spoke one language – (Life-perseveration) irrespective  of their religions and ethnicity. Many laid on the bare floor not regarding the dirt on the floor or the beauty of the fabrics they had on to avoid been hit by a straying bullet.  Humorously, I found myself flat on the floor besides a middle aged woman who had run out of her bus and was taking cover on the floor under a packed car! (Did I hear you laughing???)
The fear of stray bullets was real. The fear of the loss of life was real. The panic and worry over loved ones who lived within the vicinity was intense. In a flesh, I could see that, indeed, the most important possession or achievement in life was ‘life’ (the privileged opportunity to exist, to live) and not just ‘things’ – Cars, houses, fame, prestige, family, Careers, businesses… and so on!
Jesus, in Luke 12: 15 hits the nail on the head, when he advised a young man about covetousness.

Now, do not get me wrong, ‘the abundance of things’ are good necessaries that make life comfortable and are much to be desired.
But again, what benefit will it be to anyone if he gained ‘everything’ and lose the most important thing – his life, his soul? Well I am just asking…
What I observed that Tuesday morning, reminded me that:

All that God created was to sustain Life. I learnt that, Life itself is more important than the things that were created to sustain it. I learnt that when life is threaten, man’s instinct to survive is activated in a reflex!

Are you more concerned about the substance of life than the ‘sustainer’ of life?
God is the One who Sustains life. He opens His hand and satisfies the desire of every living thing… You can rely on Him! Proverbs 3:3-5
My name is precious, I was Bipolar and I live a full life.
Prayer:
Heavenly Father, do not permit me to seek sustenance outside of you. Help me to understand that my life is more important than food and that my body is more important than Clothes… in Jesus name, Amen. Luke 12:22-31
Reference:
All scriptures are taken from the King James Version of the Holy Bible.
Picture: www.canva.com
*The Robbery incident in Festac Town, Lagos on Tuesday, 6th October, 2015 (http://www.channelstv.com/2015/10/13/mother-and-child-killed-in-festac-bank-robbery/)
Read more