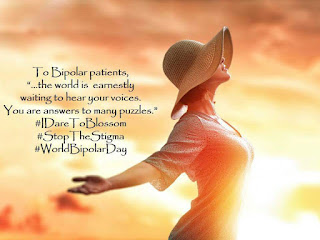 World Bipolar Day is an initiative of International Bipolar Foundation which has been celebrated every year, for the past four years, on March 30th. This will be my first post in the month of March and my third year of participating in the World Bipolar Day celebration. I wrote three post in the last three weeks, but did not get the motivation to upload them. But today is different. Just thinking about the theme of this years’ World Bipolar Day: “My Bipolar Fuels My Passion” and how my life with Bipolar has been, I was motivated to share a few post across my social media platforms- @Idaretoblossom (twitter) @idaretoblossom_org (Instagram) Google Plus (Precious Ben) and I Dare To Blossom (FaceBook Page)- to raise awareness on Bipolar Disorder and to make my contribution to ending and eradicating the stigma around Bipolar Disorder and Mental Health in my part of the world.

To encourage myself, and inspire someone out there to live beyond the bipolar disorder diagnoses, here are my thoughts on #WorldBipolarDay2017:

Let’s end the stigma around Bipolar Disorder and Mental Health.

Living with Bipolar Disorder does not mean a person is less than a human being or have nothing to offer. No. It just means that, they are more conscious of their emotions, feelings, and life in general. Help #bipolar patients by educating yourself on what the illness means and on how you can be of help to them in time of need.

Being diagnosed bipolar is not a license to self-pity! 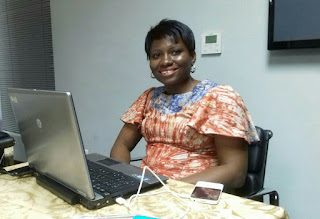 No! It’s not and should not be! The next time you are tempted to think so, quickly remember that there are many great people in the world today, who were once diagnosed with bipolar but today are not remembered for the negative impact of bipolar but are rather renowned for the notable accomplishments they have attained in their chosen sphere of influence.

Did you know that many famous people have being diagnosed with bipolar? In an article written by Christian Nordqvist in Medical News Today, the following famous people were outlined.

Guess what? The list has not ended, it includes you reading this now wondering how to deal with the bi-polar situation. It includes me, it includes thousands and thousands of individuals who are living above the limitations of bipolar but have not taken the bold step to come out with their stories. It includes anyone out there who will make a conscious decision to blossom and commit to the process.

If you have been diagnosed with or you know people who are living with #BipolarDisorder, then you must recognise that a bipolar disorder diagnosis do not and should not define anyone.
Yet, somehow, the responsible of educating the world around us about bipolar disorder belongs to everyone and how much you know about the illness goes a long way to determine your response to it.

Dear Bipolar Warrior, sharing your bipolar story is the ultimate way to combat the stigma around mental health and Bipolar but you do not have to share if it means greater risk for your recovery and wellbeing. There are many ways we can gradually eradicate the stigma associated with the diagnosis. The first way is to get educated about the illness. Do your research and be a student of yourself!
If you are living with Bipolar Disorder you have alot of advantages (and disadvantages also) harness your advantages and let them work for you!

Dear friends, Bipolar Disorder is an illness and it should not define anyone.
#WorldBipolarDay 2017
#MyBipolarFuelsMyPassion4
#March30th
Read more