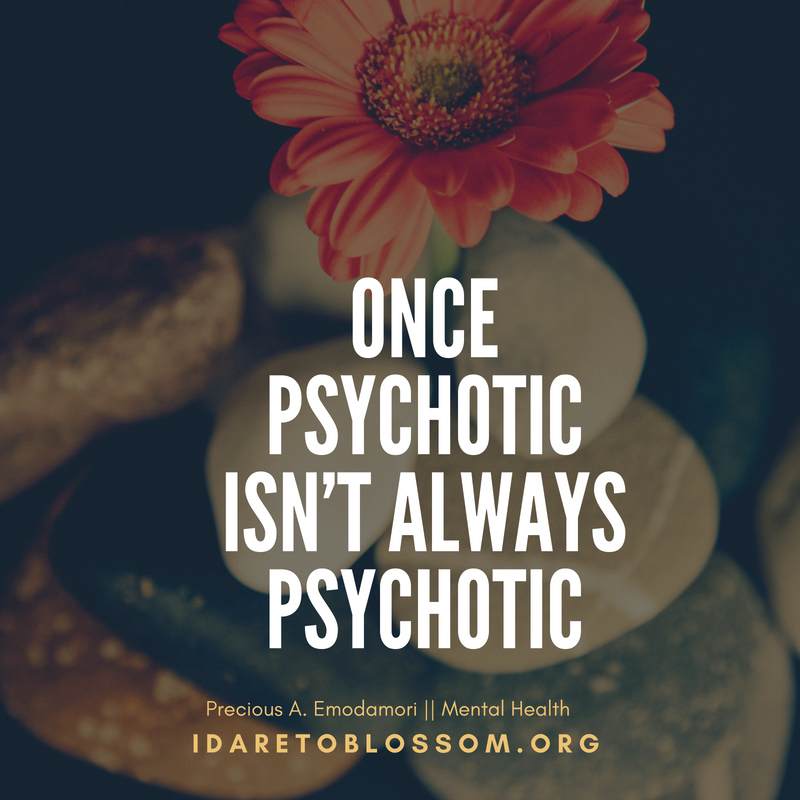 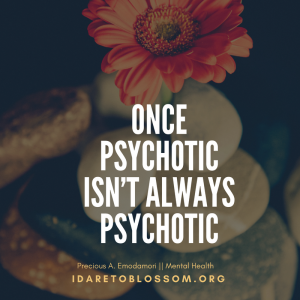 Psychosis can accompany a severe manic episode of Bipolar disorder.  When a mentally ill person becomes psychotic, literally, it means that there is a loss of contact with reality and that the person’s sense of reality is highly distorted.  Most of the people we see roaming the streets homeless started with psychosis that didn’t receive prompt professional medical attention or psychosis that wasn’t managed well with a refined bed rest in a Neuro- Psychiatry hospital.  Whatever the cause, in any case, psychosis isn’t good for a mentally ill person. It must be identified early – it is easily identified in the display of unusual behavioral patterns – and given prompt medical attention.
Another reason why Psychosis must be treated promptly is that, the longer a mentally ill persons stays in a psychotic state, the further away from reality they are. The person descried as ‘mad’, roaming the streets naked and not in the right state of mind, might just be in an advanced phase of a mental illness that started with psychosis. Sometimes, as a result of the prolonged delay before treatment, even when they have been treated, there may still be a slight loss with reality displayed in certain behaviourial patterns when some life issues occur. This is one reason why psychotic patients are treated as an emergence and are monitored to take their medication as at when due.
That said, it is important to note that a mentally ill person can recover from a psychosis and learn how to manage their mental health, to identify triggers and to avoid getting into a psychotic state of mind.  Often, the sad reality is that the people who witnessed a psychotic patient, hardly ever forget the scene because it is usually accompanied with a lot of drama.
Some of these people find it difficult to adjust their mindset and accept the fact that ‘once a mentally ill patient was psychotic, doesn’t mean that they will always or that they are always in a psychotic state of mind.’ This attitude from some people fuels mental health stigma in subtle sad ways.
You are stigmatising a mentally ill person if you feel that they don’t deserve love and attention.
You stigmatise them when you whisper into your friend’s ears and laugh out loud and ignore them as they approach, you may not be talking about them; but when you don’t make the effort to make them understand that, you leave them feeling STIGMAISED. You stigmatise when you give them a disdainful look and nurture hurtful thoughts in your heart. You stigmatise them when you are overly careful in your speech with them because you feel that they can respond with violence.
You stigmatise them when you keep seeing them through the lens of the mental illness they are bravely managing. You stigmatise when you refuse to give them the job because you are afraid they can become psychotic and make a mess of your work space….No! No! No! Psychosis isn’t automatic.  It doesn’t appear unannounced; there are always signs. Always. Hopefully, when my book is out, you would read how psychosis was for me. But for now, please #curethestigma of #mentalhealth by not treating persons who had previously been psychotic as if they are still psychotic. ONCE PSYCHOTIC ISN’T ALWAYS PSYCHOTIC.
My Name is Precious, I was Bipolar and I live a Full Life 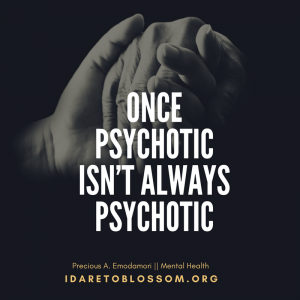