“Erotomania is a type of delusion in which the affected person believes that another person, usually a stranger, high-status or famous person, is in love with him or her. The illness often occurs during psychosis, especially in patients with schizophrenia, delusional disorder or bipolar mania. During an erotomanic episode, the patient believes that a secret admirer is declaring his or her affection to the patient, often by special glances, signals, telepathy, or messages through the media. Usually the patient then returns the perceived affection by means of letters, phone calls, gifts, and visits to the unwitting recipient. Even though these advances are unexpected and often unwanted, any denial of affection by the object of this delusional love is dismissed by the patient as a ploy to conceal the forbidden love from the rest of the world. The term erotomania is often confused with obsessive love, obsession with unrequited love, or hypersexuality.” – educalingo.com 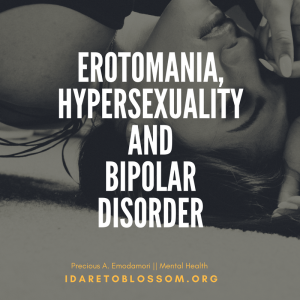 “Hypersexuality is extremely frequent or suddenly increased sexual urges or sexual activity. Although hypersexuality can be caused by some medical conditions or medications, in most cases the cause is unknown. Mental health problems such as bipolar disorders can give rise to hypersexuality, and alcohol and some drugs can affect social and sexual inhibitions in some people.” – educalingo.com

Here are my thoughts:
Bipolar disorder can influence a person’s libido and determine their response to sexual intimacy; this can either result in a spontaneous rush into intimacy while throwing caution to the winds or to a cautious approach to matters of the heart while ensuring that the decision to get intimate is well thought through.

Yes, a bipolar patient may be attracted to someone and for no reason feel compelled by their desires to stick with that person, but it is the increased libido that comes with manic episodes that triggers hyper sexuality in bipolar patients. It is the responsibility of the support team to identify when this happens and seek immediate intervention. If you think that a person’s sexuality is being influenced by a manic episode, it is wrong to tell them that they are promiscuous. Or use words or imageries that suggest same. If you do so, you are stigmatizing them. SO what can you do? If you are an influence in that person’s life, you can encourage them to stay out of dating and go back to the psychiatrists to review their medication.

Also, people who manage bipolar disorder can train themselves to say NO and mean it. I believe that sex outside marriage spoils a good relationship. A relationship held in tact with sex will break down no sooner or later because sex on its own is not the only requirement that makes a happy marriage. Love and mutual respect, good communication and understanding are vital for a good relationship that can lead to marriage. So, please stop giving it out for Free. You are worth more.

Choose the person who loves you enough to wait for sex till the wedding night. I made that choice 8 years ago, and every day, I’m thankful to God that I didn’t let hypersexuality ruin my relationship with my finance who is now my spouse. Somehow, I waited.  Sex is worth waiting for.

My name is Precious, I was Bipolar and I live a full life